The latest on the abortion lawsuits in Texas and Mississippi

Nickname: Texas 6-week abortion ban
Court: U.S. Supreme Court
Status: Status: Oral arguments on November 1, 2021 - awaiting decision
ACLU Role: Lead counsel
Issue: Reproductive Rights
On Sept. 1, 2021, the U.S. Supreme Court allowed Texas’ S.B. 8 to go into effect, banning abortions after six weeks of pregnancy to eliminate access to approximately 85 to 90 percent of abortions in Texas. This law does not affect abortions in any other state. The law continues to be challenged by reproductive rights groups, including the ACLU and ACLU of Texas, in federal court in Whole Women’s Health v. Jackson. 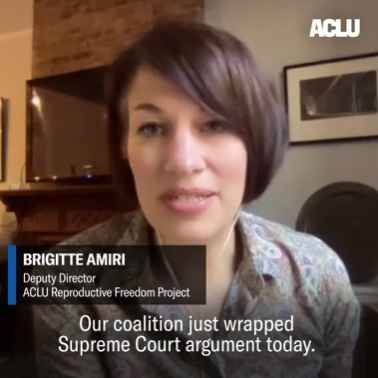 Today, the ACLU's coalition wrapped arguments at the Supreme Court, fighting for our right to get an abortion in Texas. One of our lawyers on the case, Brigitte Amiri, discusses how those arguments went — and what's next. 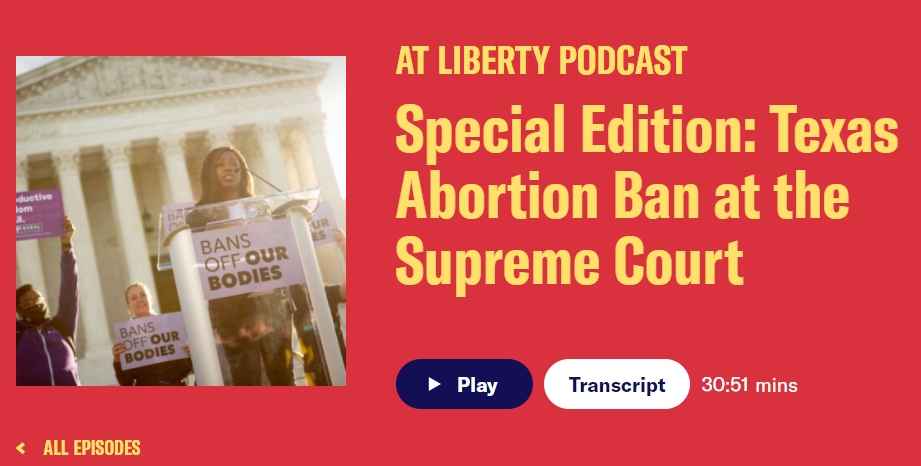 Brigitte Amiri, Deputy Director of the ACLU’s Reproductive Freedom Project joins us to help break it all down. Plus, we hear from demonstrators Kenya Martin and MJ Flores rallying right outside of the Supreme Court building. 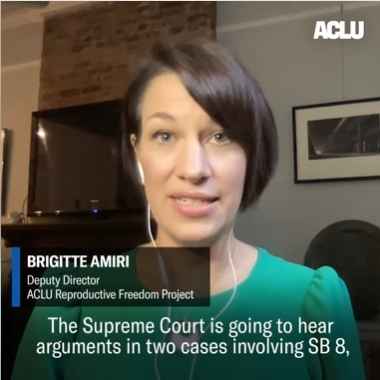 The Supreme Court is going to hear two cases, including our own on Texas’ extreme abortion ban, SB8, this Monday. Brigitte Amiri, one of our attorneys on the case, is here to discuss what’s at stake.

Supreme Court Will Hear Texas Abortion Ban Cases
SCOTUS Did Not Grant a Request to Immediately Block the Ban, but Will Hear Two Cases Against the Ban on November 1
10/22/21
Read the Press Release 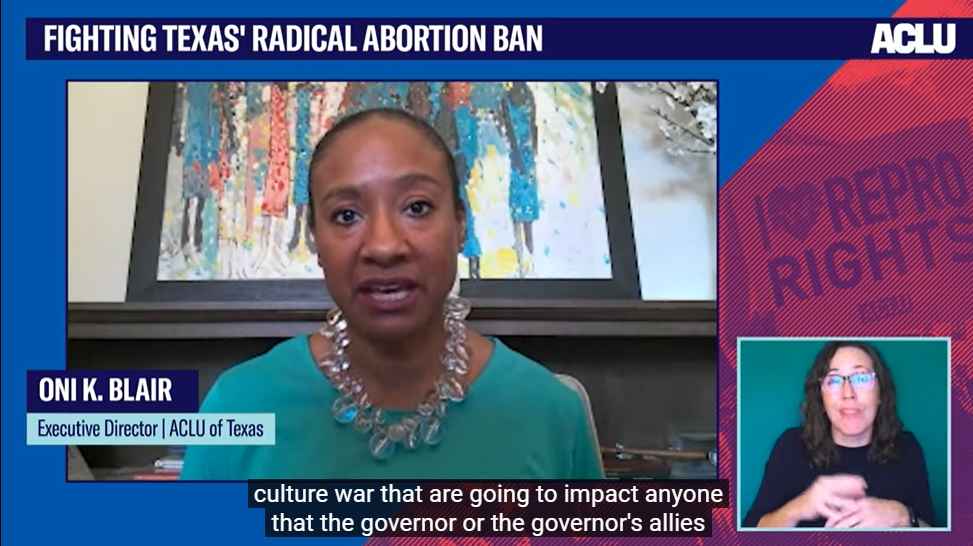 On September 1, Texas’ radical six-week abortion ban, SB8, went into effect. During this emergency town hall, you’ll hear from our panel of ACLU lawyers and policy experts on the impact of SB8, how the ACLU is fighting the unconstitutional law, and what you can do to help. 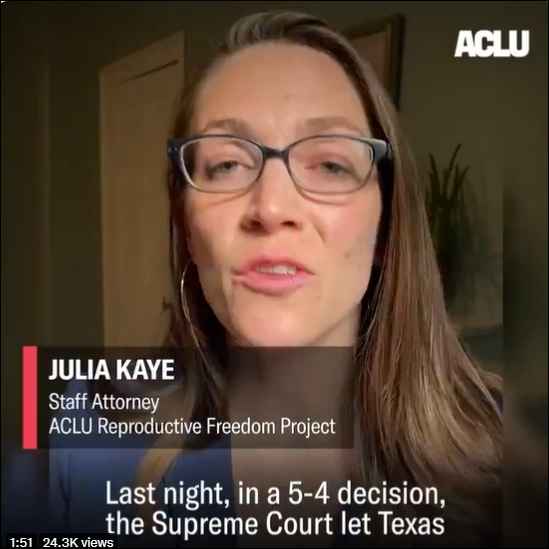 Last night, the Supreme Court let Texas ban abortion beginning at six weeks of pregnancy, before many people even know they're pregnant.

The Texas legislature is attempting to pass a series of harmful bills this special session, including legislation to ban trans youth in sports, further limit access to reproductive healthcare, and dictate how U.S. race history can be taught in school. Joining us to talk about this legislative stand off is Sarah Labowitz, policy and advocacy director at the ACLU of Texas. 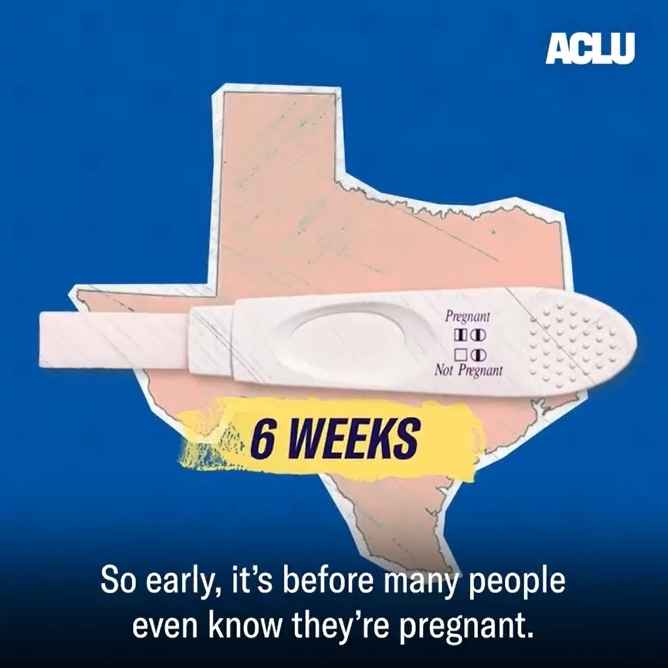 A new Texas law banning abortions early as 6 weeks of pregnancy is scheduled to go into effect in September. To enforce it, Texas encourages ANYONE who disapproves of an abortion to sue those that helped the person get an abortion for $10,000. But the law doesn’t stop there.

This December, after three years of court hearings and appeals, the challenge to the new Mississippi ban will be heard by the Supreme Court of the United States. Mississippi has directly challenged decades of Supreme Court precedent recognizing abortion as a constitutional right.

Dobbs v. Jackson Women’s Health Organization is a case in which the Center for Reproductive Rights is challenging a ban on abortion at 15 weeks of pregnancy that the Mississippi legislature and governor approved in 2018. The law has been blocked from taking effect by a temporary restraining order issued by a federal district court that is in place as the case proceeds.

Read the case overview from the Center for Reproductive Rights 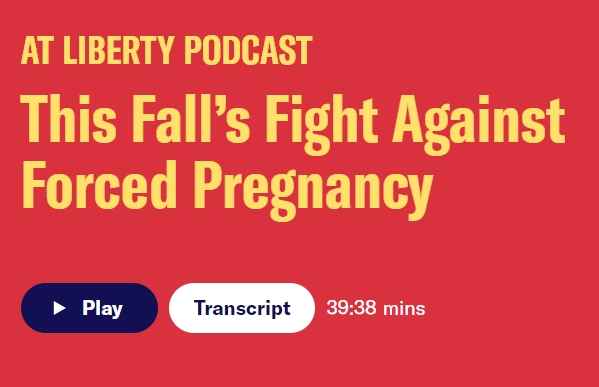 At Liberty Podcast: This Fall’s Fight Against Forced Pregnancy

To discuss the state of abortion rights and to preview what’s to come this fall, we’re joined by 3 experts leading the legal dialogue: Melissa Murray, constitutional and family law professor at NYU Law and co-host of Strict Scrutiny, Imani Gandy, senior editor at the Rewire News Group and co-host of the podcast Boom! Lawyered, and our very own Alexa Kolbi-Molinas, senior staff attorney at the ACLU’s Reproductive Freedom Project.

Press Release: ACLU Represents Planned Parenthood in a Lawsuit in...