Since 2015, political attacks against LGBTQ people have grown exponentially in state legislatures across the country. The ACLU has launched a nationwide tracking system to publicly document and categorize anti-LGBTQ bills introduced in state legislatures, and guide users to learn more about efforts to protect LGBTQ people and the right to safe, inclusive schools and communities.

The goal of this page is to help advocates, organizers, and allies take action against these bills while also revealing these proposals for what they are: a coordinated and political attack on LGBTQ people nationwide. 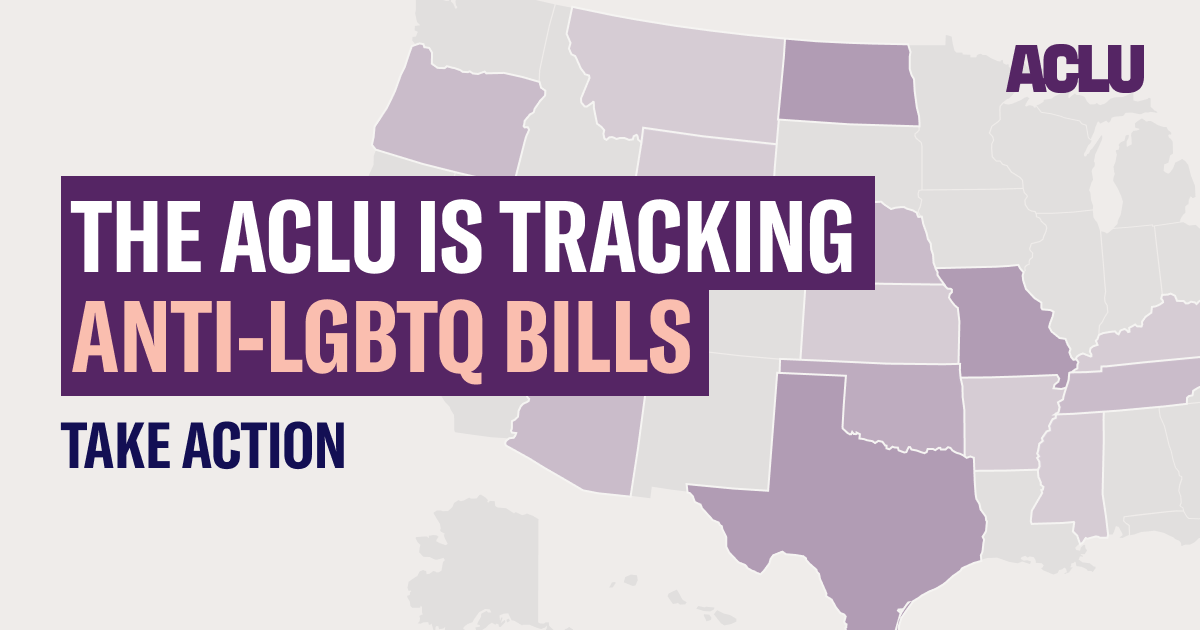 Q: How does the ACLU track anti-LGBTQ bills?

A: Our legal and advocacy team uses a bill-tracking service and works with ACLU affiliates and local organizations across the country to monitor state legislatures for bills targeting the rights of LGBTQ people. Each bill is reviewed by legal staff at the ACLU’s LGBTQ & HIV Project before being categorized on this site.

Q: What is the ACLU doing to stop these bills?

The ACLU’s first priority in this work is stopping any anti-LGBTQ bill from becoming law by working alongside our affiliates and coalition partners, building relationships with grassroots activists, direct engagement with lawmakers, and educating the broader public about the harms of these attacks. Because of this hard work, most proposed anti-LGBTQ bills never become law.

Bills that do become law may face a legal challenge from the ACLU, its affiliates, or one of our many partners across the LGBTQ rights movement. In recent years, the ACLU has challenged bills across the country restricting access to gender-affirming health care, barring trans people from updating identity documents, and denying transgender students equal access to school facilities and activities, as well as defending inclusive policies from political and legal attacks.

Q: How are anti-LGBTQ bills categorized?

A: Each bill is assigned one or more categories based on its focus and issue matter. These include:

Lawmakers are targeting access to medically-necessary health care for transgender people. Many of these bills ban affirming care for trans youth, and can even create criminal penalties for providing this care. These bills exempt identical treatments offered to cisgender youth and even surgeries forced onto intersex youth. Other bills block funding to medical centers that offer gender-affirming care, or block Medicaid or other insurance coverage of health care for transgender people.

State lawmakers are trying to prevent trans students from participating in school activities like sports, force teachers to out students, and censor in-school discussions of LGBTQ people and issues. Instead of limiting resources, education, and opportunities, our schools should protect and support all students to learn and thrive.

Despite the safeguards of the First Amendment’s right to free expression, politicians are fighting to restrict how and when LGBTQ people can be themselves, limiting access to books about them and trying to ban or censor performances like drag shows.

These bills attempt to limit the ability to update gender information on IDs and records, such as birth certificates and driver’s licenses. This puts transgender people at risk of losing jobs, facing harassment, and other harms. Trans, intersex, and nonbinary people need IDs that accurately reflect who they are to travel, apply for jobs, and enter public establishments without risk of harassment or harm.

These bills attempt to undermine and weaken nondiscrimination laws by allowing employers, businesses, and even hospitals to turn away LGBTQ people or refuse them equal treatment.

These bills don’t quite fit in any of the other categories, but nonetheless target the rights of LGBTQ people. Examples include bans on marriage and bills preempting local nondiscrimination protections.

Q: What makes a bill an “anti-LGBTQ” bill?

A: Each bill is reviewed by ACLU legal staff and designated an anti-LGBTQ bill based on its text, potential impact, and restrictions or intrusions based on sexual orientation or gender identity. Most of these bills may not use words like “gay” or “transgender” in their text but nonetheless aim directly to restrict the rights, safety, or liberty of LGBTQ people.

Not included on this page are bills and proposals which may have a disparate impact on LGBTQ people but are not directly targeted at LGBTQ people. Restrictions on abortion access, for example, have a disparate impact on LGBQ women and many transgender people, but will not be tallied on this page at this time. Click here to learn more about the ACLU’s work to expand reproductive freedom and abortion access.

Q: Where can I find data on anti-LGBTQ bills from previous years?

A: Legislative tallies from previous years can be found here.

Q: How can I take action against these anti-LGBTQ bills?

A: You can use our tracking system to see what’s happening in your state, and sign for our Community Legislative Action Team to stay current on Utah legislative attacks on trans rights, reproductive freedom, and more.

The Intertwined Future of Attacks on Abortion and Gender-Affirming...