March 25 - The Utah Legislature overrode Gov. Cox's veto of H.B. 11 after dozens of lawmakers switched their votes to support a total ban. In a statement released to the press, the ACLU of Utah publicly announced that litigation to stop H.B. 11 from taking effect is both necessary and inevitable. 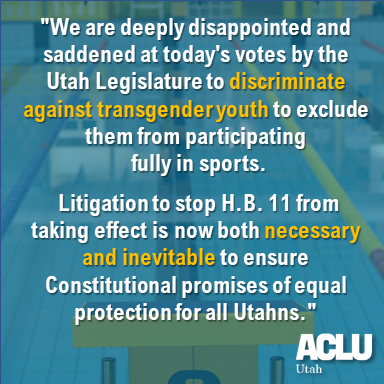 March 24 - Utah Gov. Spencer Cox vetoed H.B. 11 as he pledged to do the last night of the session. Unusually, Cox published a 5-page letter explaining his veto decision. The ACLU of Utah published a "thank you" letter to Gov. Cox for vetoing H.B. 11

March 4 - On the last night of the session, Sen. Dan McCay re-wrote H.B. 11 on the Senate floor to create a total ban on transgender girls competing in middle school and high school sports. His new bill retained the commission system as a back-up option in case the ban is overturned by the courts. After a brief but intense debate, the revised H.B. 11 passed the Senate and House just hours before the end of the session. Betwen the Senate and House vote, Gov. Spencer Cox held a  news conference and pledged to veto the new version of H.B. 11 that contained a ban on transgender youth.

March 1 - Read the op-ed by ACLU of Utah Graduate Associate Hanna Jackovich about why Utah needs a "Homeless Bill of Rights" and other reforms to make real progress on protecting the rights of people living without shelter. Opinion: Here’s how to really help Utah’s homeless, Deseret News, 03/01/2022 (PDF)

February 25 - Watch this video of the ACLU of Utah's Lyla Mahmoud testifying against H.B. 374, a bill that would ban books and curriculum defied as "sensitive materials" because of the sexual content they contain. We think #HB374 runs smack dab into the First Amendment by placing library books, textbooks, and lesson plans at risk of being banned for content that is protected. (YouTube) 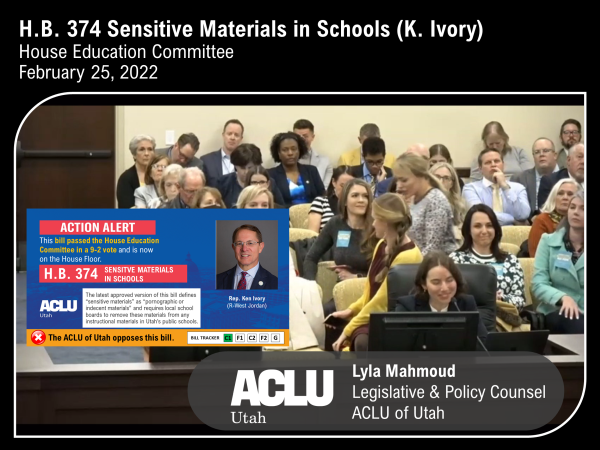 February 25 - Listen to the audio recording of Hanna Jackovich testifying in favor of H.B. 440, a bill increases the ability for unsheltered individuals to find places to stay and increases transparency on municipal efforts that criminalize unsheltered communities. (MP4)

February 23 - In Episode #6 of ACLU on the Hill, Legislative & Policy Counsel Lyla Mahmoud describes why the First Amendment protects books and other instructional material in Utah's public schools from periodic attempts at censorship as several bills at the Utah Legislature are trying to do now.

February 22 - Earning the title of "The Worst Bill of the Session" is competitive event at the Utah Capitol. But H.B. 371 from Rep. Phil Lyman won it with yards to spare. This bill would eliminate Utah's popular vote-by-mail system, hamstring voter registration efforts, and require a sham ballot review. Listen as the ACLU of Utah's Nikila Venugopal testifies against H.B. 371 during a raucus hearing where lawmakers voted to defeat the bill.

February 18 - With great power comes great... flexibility. In Episode #5 of ACLU on the Hill, Deputy Legal Director Jason Groth explains why we oppose H.B.257, a bill that would place new limits on prosecutorial discretion in Utah

February 16 -  Voting bills are the focus of the latest Episode #4 of "ACLU on the Hill," as Nikila Venugopal, the ACLU of Utah's Director of Campaigns, explains how three bills are seeking to change Utah elections and your access to the ballot box. Watch on YouTube or in the video screen below.

February 15 -  Do you sometimes lose track of bills at the Utah Legislature? This year, there are several bills seeking to change Utah elections and how you vote--including legislation that would eliminate vote-by-mail for the entire state. Use our Voting Bill Tracker to follow these important bills.

February 15 - We opposed S.B. 194, a bill that limits the decision-making power of public health experts and shifts it to elected officials. Listen as Lyla Mahmoud testifies against this bill in the Senate Health and Human Services Committee. An amended version of S.B. 194 eventually passed the legislature.

February 14 - After a lengthy hearing, the House Law Enforcement & Criminal Justice committee voted 5-6 to stop H.B. 147, the bill to replace the death penalty in Utah. Despite support from numerous county prosecutors, and the compelling testimony from Sharon Weeks, the sister of a murder victim, the lawmakers on that committee decided that if the death penalty is broken in Utah, they can fix it. We appreciate all the effort that former ACLU of Utah staffer put into this legislation.

February 10 - Check out the op-ed written by Deputy Legal Director Jason M. Groth about why lawmakers should oppose the restrictions on prosecutor discretion found in H.B. 257. "Jason Groth: Let voters, not politicians, decide how prosecutors do their jobs," Salt Lake Tribune, 2/10/22) (PDF) 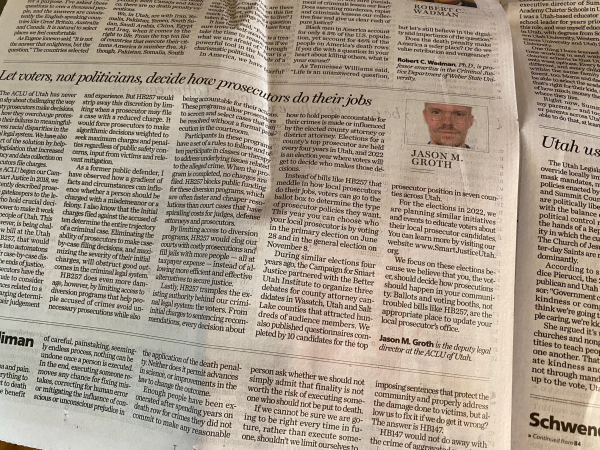 February 9 - Many voting bills we encounter at the Utah Legislature we end up opposing. But not H.B. 188. This needed bill would have placed safeguards around the signature verification process for mail-in ballots to make sure that a person's disability or a change in handwriting style would not disqualify their vote. Despite our efforts, including testimony in favor of H.B. 188 by Nikila Venugopal, H.B. 188 did not pass the legislature.

February 7 - Big News... #HB147, the bill to replace the death penalty in Utah with a life sentence without parole, was voted out of the House Rules Committee today. This gate-keeping committee had been holding this bill -- but now H.B. 147 can be heard in a House Committee.

February 4 - We had to record Episode #3 of "ACLU on the Hill" twice to get it right. That's because the bill we focused on, H.B. 171 (Custodial Interrogation Amendments) changed at the last minute just before Lyla Mahmoud testified about it. We hear what happened, and how this bill aims to prevent police from lying about evidence when questioning children.

February 3 - The fees to apply for and renew a Driver Privilege Card (DPC), the idetification that people without documention can use to operate vehicles in Utah, was always more than a regular driver's license--depsite the fact that they need to be renewed more often. H.B. 222 lowers the fees for DPCs, an idea we supported with this testimony by the ACLU of Utah's Immigrants' Rights Policy Fellow, Lauren Beheshti.

February 3 - Listen as Lyla Mahmoud, the ACLU of Utah's Legislative & Policy Counsel, testifies in favor of H.B. 171, a bill that would prevent law enforcement officers from lying to children about evidence or leniency during interrogations. As a former public defender, she explained to legislators that children are more likely to make false confessions when police use deceptive tactics during interrogations because they lack the same decision-making abilities as adults.

February 2 - We supported S.B. 126, which require law enforcement officers to intervene and report any incident when another officer engages in misconduct, including using excessive force, conducting an unlawful search, or engaging in discrimination. Lyla Mahmoud, the ACLU of Utah's Legislative & Policy Counsel, drew on her prior experience as a public defender when she testified in favor of this bill during a Senate committee hearing. S.B. 126 eventually passed the legislature without a single negative vote.

January 31 - H.B. 130 was one of two bills that sought to expand the number of languages the Utah drivers license test could be offered in. Although this bill didn't pass, another bill (S.B. 216), did receive affirmative votes from both chambers of the legislature and became law. Listen as ACLU of Utah's Immigrants' Rights Policy Fellow, Lauren Beheshti explains why adding more languages is a smart idea for the future of Utah.

January 31 - We are publishing Action Alerts like this one for H.B. 130 on our Facebook and Twitter profiles almost every day. Follow us on social media to stay updated on our priority bills and other issues at the Utah Legislature.

January 28 - Meet Lyla Mahmoud, the ACLU of Utah's new Legislative & Policy Counsel, in the second episode of "ACLU on the Hill." Learn about her public defender background and her testimony this week in favor of S.B. 120 (Juvenile Justice Amendments), a bill that seeks to modify and eliminate fees and fines in the juvenile justice system from restitution and expungement. 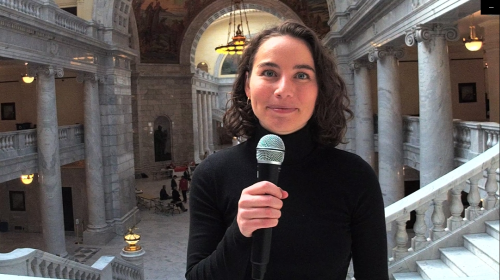 January 27 - On Wednesday, ACLU of Utah Legislative & Policy Counsel Lyla Mahmoud testified in favor of #SB120, which passed out of the Senate committee and now heads to the Senate floor. Listen to her statement at this link (audio file). SB120 seeks to eliminate fees and fines in the juvenile justice system, which we know are often applied in a discriminatory way against people of color.

Jauary 20 - Find all episodes of "ACLU of the Hill" at the ACLU of Utah's YouTube channel: https://www.youtube.com/user/ACLUofUtah/videos 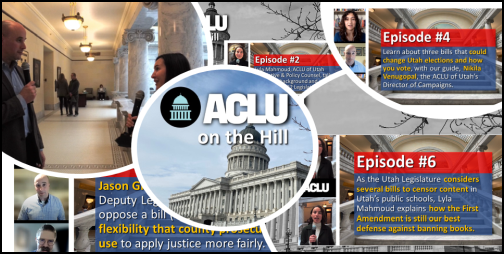 January 20 - In this first episode of ACLU on the Hill in 2022, we hear from Bryan Stevenson, the founder of the Equal Justice Initiative and author of the acclaimed book "Just Mercy" about his legal efforts to free a man wrongly condemned to death. Stevenson was in Salt Lake City this week to convince Utah lawmakers to end the death penalty in our state.
We also hear from Marina Lowe, who is leading the ACLU's efforts to promote H.B. 147, "Death Penalty Modifications," the legislation filed this session to eliminate the death penalty. We will keep you updated on this important bill as the session continues. 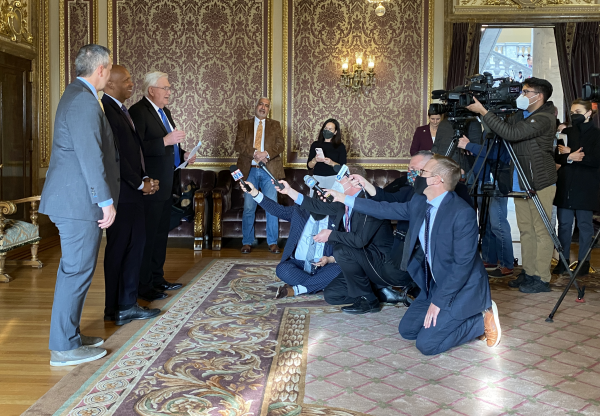 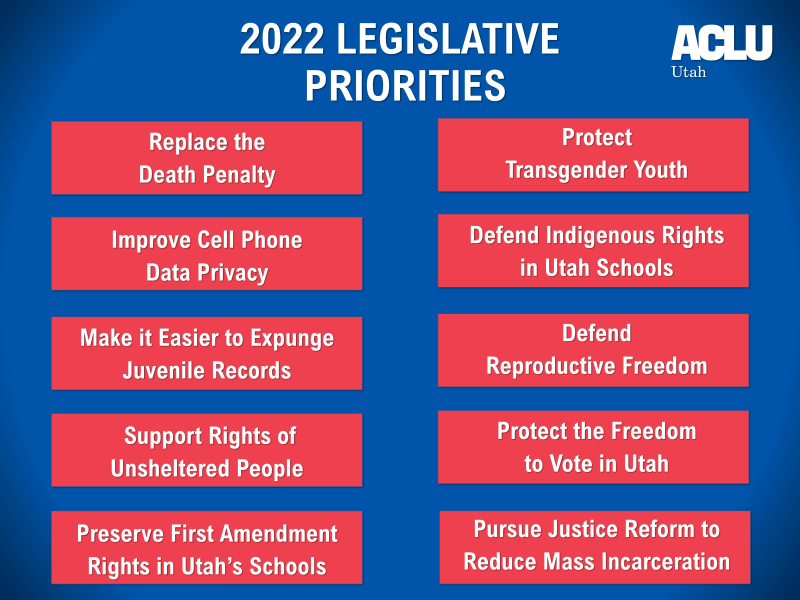 January 11 - Stay informed about the latest legislative news by signing up for the ACLU of Utah's Text Action Alerts.... enroll here (link)

Utah is Not Alone, ACLU Tracks Anti-LGBTQ Bills Coordinated and...

The Intertwined Future of Attacks on Abortion and Gender-Affirming...