The American Civil Liberties Union of Utah Foundation, Inc. (ACLU) and Holland & Hart, LLP filed a lawsuit on June 29, 2020 against the City of Murray and Jarom Mohlman Allred concerning the unlawful arrest and prosecution of a 59-year-old black woman accused of driving under the influence of an illegal substance on August 21, 2018.  The case was settled on July 14, 2021.

On July 14, 2021, the American Civil Liberties Union of Utah Foundation, Inc. (ACLU) and Holland & Hart LLP announced a settlement in a civil rights lawsuit filed against the Murray City Police Department on behalf of Donna Miller, a 62-year-old Black woman.

As part of the settlement, Ms. Miller received $152,000 to resolve her allegations of racial bias by a Murray police officer during an August 2018 traffic stop that resulted in her arrest and subsequent charges, suspension of her license, and seizure of her vehicle due to claims that she was driving under the influence. Ms. Miller was forced to retain legal counsel to dismiss the wrongful charges, pay fines and expenses, reinstate her driver’s license, and clear her record even after Murray City dropped all charges against her.

The plaintiff, Donna R. Miller, is a 20+ year member of the Church of Jesus Christ of Latter-Day Saints. Ms. Miller moved to Salt Lake County, Utah in 2017 to attend a part-time nursing school program at LDS Business College. Ms. Miller was in the third semester of this program, while also working part-time as a patient care technician at a local hospital, when the racially-motivated, traumatic stop, seizure, and arrest incident occurred.

According to the lawsuit, a white policeman employed by Murray City recognized by his fellow officers as an “attention hound” who engages in improper, often dangerous, misconduct, engaged in blatant and illegal racial profiling that violated Ms. Miller’s civil and constitutional rights. As detailed in the complaint, the officer initially stopped Ms. Miller on the pretext that she had no car insurance on file, which she quickly rebutted by showing the officer her proof of insurance. Without probable cause or even reasonable suspicion, the officer then accused her of driving under the influence of an illegal substance, which she strongly and consistently denied. 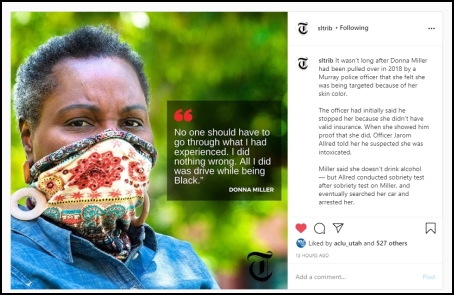 ACLU of Utah Statement on ‘Back the Blue’ Hate Crime Enhancement in...