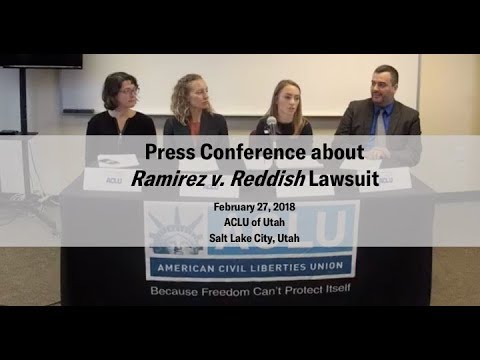 On Tuesday, February 27, 2018,  the ACLU of Utah Foundation, Inc. announced a new lawsuit filed against United States Immigration and Customs Enforcement (ICE) and U.S Marshals over two SWAT-style, home raids on a Utah family living in Heber City in April 2017. The ACLU of Utah is being joined in this lawsuit by the ACLU’s Immigrants’ Rights Project, and Covington & Burling, LLP.

Copy of the Complaint

PDF Versions of the Press Release

Read It in English   Read it in Spanish

Article
This Is What Immigration Enforcement Looks Like Under President Trump

Video Statements from the Plaintiffs

Watch in English Watch in Spanish

The ACLU of Utah Supports S.B. 214 to Dismantle Utah's Cruel and...

ACLU of Utah letter to ICE and U.S. Attorney for Utah

ACLU of Utah Submits Brief in Support of Undocumented Immigrants...

The ACLU of Utah Uncovers Details of Airport Chaos