On January 29, 2020, the American Civil Liberties Union of Utah Foundation, Inc. (ACLU,) Covington & Burling, LLP, and Crowell & Moring LLP filed a lawsuit today against agents and officials from the Utah Division of Adult Probation & Parole (AP&P) and the executive director of the Utah Department of Corrections over actions taken during a violent raid against a Salt Lake City family in August 2018.

Today the ACLU of Utah announced a settlement in the lawsuit, Marquez Yañez v. Burdine et al, filed in January 2020 on behalf of the Yañez family of Salt Lake City against Utah Division of Adult Probation & Parole (AP&P).

Specifically, the State has agreed to pay Plaintiffs $137,500 on behalf of the Defendants and the Utah Department of Corrections has agreed, as part of its annual in-service training where such topics are routinely covered, to provide further instruction for its Adult Probation and Parole officers regarding entry into homes and the Fourth Amendment, when to contact federal authorities about people in homes, racial profiling, and precautions to consider when minors are present.

On Wednesday, January 29, 2020, the ACLU of Utah Foundation, Inc. announced a new lawsuit filed against agents and officials from the Utah Division of Adult Probation & Parole (AP&P) and the executive director of the Utah Department of Corrections over actions taken during a violent raid against a Salt Lake City family in August 2018.

The ACLU of Utah is being joined in this lawsuit by Covington & Burling, LLP, and Crowell & Moring LLP.

The plaintiffs in this lawsuit are the Yanez family: three adults and three children at the time of the raid, whose home was surrounded and then invaded by more than a dozen AP&P agents dressed in military-style gear and carrying assault-style weapons.

The lawsuit asserts constitutional violations of plaintiffs’ rights, privileges, and immunities secured by the Fourth Amendment of the U.S. Constitution. It alleges that defendants’ actions were in violation of Plaintiffs’ clearly-established, constitutionally-guaranteed rights to be free from unreasonable and unlawful searches and seizures, and to be free from the use of excessive force. The Plaintiffs are also suing AP&P for conspiracy to violate their civil rights based on ethnicity and national origin. Finally, the lawsuit seeks injunctive relief from AP&P to make policy changes so that these violent and discriminatory raids do not happen again in Utah.

Copy of the press release announcing the lawsuit (PDF) 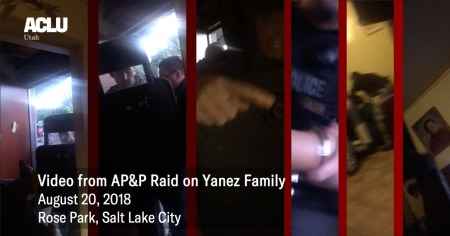 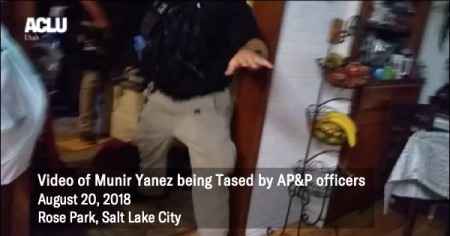 Video statements from the plaintiffs:

Video Statements by Munir Yanez and Maria Garcia
Question #1
Can you describe what happened to you and your family?
Watch QUESTION 1

Question #2
Can you tell us what you hope happens by taking legal action?
Watch Question 2

Question #3
How do you feel about being a part of the Rose Park community (of Salt Lake City)?
Watch Question 3

The ACLU of Utah Supports S.B. 214 to Dismantle Utah's Cruel and...

ACLU of Utah letter to ICE and U.S. Attorney for Utah