Toolkit: Can an elected representative or government organization block me?

Has an elected representative or government organization blocked you on social media?
If your answer is "yes," you've come to the right place.

The ACLU of Utah believes that official social media pages for elected representatives and government organizations are public forums. And we also believe that blocking individuals from accessing these pages may be an unconstitutional restriction on their right to free speech under the First Amendment.

And we're not alone.
Recent court cases in New York, Virginia, and Maine has established that elected representatives violate the First Amendment when they block individuals from expressing critical opinions on Twitter and Facebook.

So, if you have been blocked from posting or commenting on an official social media page operated by an elected representative or government organization, this is the place to start getting unblocked.

What to do When Blocked By an Elected Official Checklist

Take photos or screenshots of the social media page that blocked you, including your posts if they are still visible or archived.

Use the “So you’ve been blocked on social media by a government official” flowchart to determine if your constitutional rights were violated.

Learn why blocking people on social media is unconstitutional and violates your First Amendment rights.

Read Why Does Social Media Blocking Violate the First Amendment?

You can also read the national ACLU's blog post on this topic.

Read "Can a Government Official Block You on Twitter?"

If the flowchart determines your rights were violated, contact the elected official via phone or email and asked to be unblocked (this low-key approach resolves 50% of complaints).

If you receive no response to the above request, download and personalize one of the ACLU of Utah’s new DIY Demand Letters and send it to the elected official (see sample demand letters below).

If you receive no response after 30 days, contact the ACLU of Utah at www.acluutah.org/request-help.

“So you’ve been blocked on social media by a government official” flowchart to see if your rights were violated. 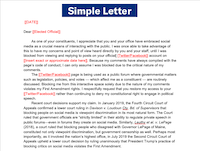 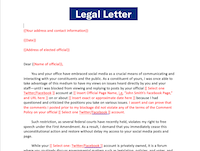 Pop Quiz: How Much Do You Know About The Midterm Elections?

Opinion: Book banning is alive and well in Utah

ACLU of Utah Statement on Book Banning and the First Amendment

The First Amendment Has Not Gone Away in Utah